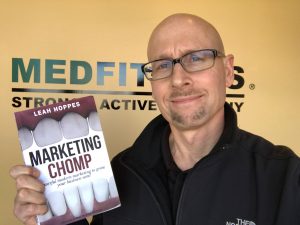 MEDFITNESS Strength Training is an On-Demand strength training facility located in St. Charles, IL which provides supervised strength training when you want it. This is unique in an industry where the norm is having to morph your life around your trainer’s availability and their facilities hours.

Founder, Richard Wolf, is a registered dietitian and licensed nutritionist. He is what we, in marketing, refer to as an “expert” in his field.

In an industry that is full of misinformation, Richard has the challenge of educating people with science-based facts, and he is passionate about teaching people why strength training is critical, especially as we get older. His target market is those over the age of 50.

After reading Marketing Chomp, Richard decided to ramp up his social media presence and launch a “Train Like a Champion” series. He posts a video every single day. Now here’s the crazy part – not only did he first commit to doing this for a few months, he has kept going after that! As of today, he’s been at it for over 500 days in a row. That’s right! For over 500 consecutive days, Richard has been recording great content and sharing on social media!

This accomplishes two things. First, it puts Richard front and center and keeps him top of mind with his followers on Facebook, Twitter and YouTube. (I literally see him everywhere!) Secondly, he’s building original content which the search engines like to see because it means you’re providing value.

He’s had past clients return after seeing his videos, he’s had an uptick in new members, he’s increased his followers on social media, and he’s on the top of everyone’s minds!! He says that everywhere he goes now people comment on his videos.

THAT’S how to create brand awareness!

Yes, it takes time, and it takes commitment but Richard is a shining example that you don’t have to spend a lot of money. Because he’s created the videos himself, it hasn’t even cost him a penny. Check out his video!

What can you learn from Richard?

1. Commitment is Key. Richard initially started with a goal of posting for 90 straight days, he’s now been at it for well 500 days!

2. Doing is even MORE important than planning. All the vision and planning in the world won’t give you results if you don’t execute. Richard made a decision and implemented quickly!

3. When asked what advice he had for you, he replied with “Get going. Begin. Do it. Don’t be afraid of how you look or sound.” I couldn’t have said it better myself! ?